Call Us
Mail Us 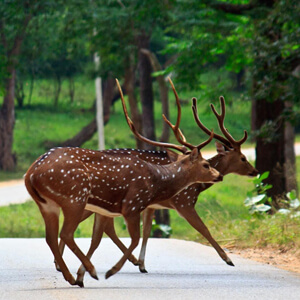 Dense, mysterious, magical - rainforests are the earth's oldest living ecosystems that produce about a third of the planet's oxygen. A dazzling array of animals and plants - amphibians, birds, fish, mammals, reptiles, flowering plants and butterflies inhabit the Vythiri rainforest.

For most part characterized by high rainfall, rainforests cover about 6 % of the Earth's surface and about 40% to 75% of all biotic species, a large part of plant species, including many exotic and beautiful flowers on the planet are indigenous to these forests. Scientists speculate that there may be millions of plants, insects and micro- organisms yet undiscovered in tropical rainforests.

The tallest trees in a rainforest, broad-leaved evergreens, at places, soar almost 200 feet above the forest floor- a maze of leaves and branches with trunks that measure up to 16 feet around and form a canopy over the forest with two layers of vegetation beneath. Sunlight is plentiful up here. Many animals - eagles, monkeys, bats and butterflies live in this zone since food is abundant. In the layer immediately beneath snakes, toucans and tree frogs dwell. Little sunshine reaches the understorey area of a rain forest and plants have to grow larger leaves to reach the sunlight and almost no plants grow in this zone and there are large concentration of insects here. Since hardly any sun reaches the forest floor, life forms begin to decay quickly.

The Nilgiri Biosphere Reserve is a part of the Western Ghat range of mountains and a UNESCO World Heritage Site that includes the lush rainforests in Vythiri besides the Mudumalai, Mukurthi, Wayanad and Bandipur national parks. The biosphere contains over 100 species of mammals, 350 species of birds, 80 species of reptiles, about 39 species of fish, 31 amphibians, 3,300 species of flowering plants and 316 species of butterflies - including tigers, elephants, lion-tailed macaques and nilgiri tahrs.

A discreet hill station located in north western Kerala, Wayanad is set along the higher slopes of the Nilgiri Biosphere, the southern fringe of the Deccan Plateau. Wayanad's evergreen forests are the most species-rich eco region in peninsular India with eighty percent of the flowering plant species of the entire mountain range found here. The name Wayanad in the vernacular translates to the land of paddy. Visitors will stretches of paddy cultivation interspersed amidst the dense forest cover.

Vythiri, a little hamlet situated in Wayanad is ideal for travellers with a passion for the outdoors and lovers of pristine nature. The landscape is majestic, composed of rugged, lofty ridges interspersed with dense tropical forests, deep valleys, spectacular waterfalls and gurgling mountain streams. Numerous outback trails and trekking routes snake through the forests with many spots ideal for adventure sports. Visitors will also find delight in the dazzling profusion of endemic flora and fauna. Wayanad is also home to many ancient, indigenous nomadic tribes who still practice their age-old customs and rituals. The forests also contain the fascinating Edakkal Caves, a Neolithic cave dwelling with Petroglyphs, the only known example in South India and a protected UNESCO Heritage Site.

According to archaeological evidence, the forests in Wayanad have probably been inhabited for more than 3,000 years with human settlements in existence at least ten centuries before Christ. Evidences of New Stone Age civilisation can be seen today in many parts of the region - the two caves of Ambukuthimala (Edakkal Caves) in Sultan Bathery, with pictographs are outstanding examples and well worth a visit.

The recorded history of this district exists only from the 10th century onward. In ancient times, this land was ruled by the Rajas of the Veda tribe. In later days, Wayanad came under the rule of the Pazhassi Rajahs of Kottayam royal dynasty, Hyder Ali of Mysore, his son Tipu, who then restored the area to the Kottayam family and subsequently ceded it to the British. This was followed by a period of fierce and internecine encounters between the British and Kerala Varma Pazhassi Rajah of the Kottayam royal family. Overwhelmed by a superior army and driven deep into the forests, he organised the Kurichiya tribe into a guerrilla army and continued to engage the British forces. Eventually, reduced to a desperate situation it is believed that the king committed suicide. The legend of Pazhassi Raja lives on in popular lore in the area.

The British authorities opened up the plateau for cultivation of tea and other cash crops. Roads were laid across the hill slopes of Wayanad, from Kozhikode and Thalassery and were later extended to the cities of Mysore and Ooty through Gudalur. Through these roads settlers from the plains and other parts of Kerala poured in seeking their fortunes in the virgin forest lands that offered incredible yields of cash crops.

Millions of people across the world call the rainforests their home, depending on the forests for their food and shelter. The indigenous tribal communities in the forests around Vythiri are composed of the Paniya, Adiya, Kattunayakan, Kurichiyan,Kuruma,Oorali and Uraali Kuruma tribes. Mostly hunter gatherers, their lives are intrinsically linked and tuned to pulse of the forests, perceptive of every mood.

At the Vythiri resort, corporate social initiatives seek to integrate both social and environmental concerns in our operations and in interactions with our stakeholders - the indigenous forest dwellers of Vythiri. Achieving a balance of economic, environmental and social imperatives, we have always believed that the resources of the forests belong to their denizens, for their benefit.

Besides training men and women in various operational functions in the resort and providing them with the option of employment, we have also sought to empower them by integrating contemporary design and quality standards in their produce, using them when possible and expanding markets for them. The quaint thatch roofs and bamboo walls in our tree houses are for instance built by members of indigenous tribes utilizing materials sourced locally.

A year is divided into four seasons; cold weather (December to February) with temperatures dropping down to 07 °C (45 °F), hot weather (March to May); the temperature goes up to a maximum of 35 °C (95 °F), South West monsoon (June to September) and North East monsoon (October to November). The average rainfall is 2,500 millimetres (98 in) per year.

An exquisite eco friendly jungle hideaway set in a lush tropical rainforest. Rustic themed cottages in indigenous architecture beside a frolicking jungle stream, splendid tropical birds on overhanging branches, colourful butterflies and the insistent chatter of cicadas, the powerful throb of nature is the only clock you will need here.
know more